In this installment, I’d like to focus on The Vanishing Point That Whistles, an Anthology of Contemporary Romanian Poetry published in 2011 by Talisman House Publishing. I was lucky enough to meet the writer, editor, and translator Paul Doru Mugur in the fall of 2007 at the launch of the previous poetry anthology he edited, Born in Utopia. I was pretty new to translations, but he made me the incredible offer to work with him on a new anthology. Four years later, the beautiful book was printed. 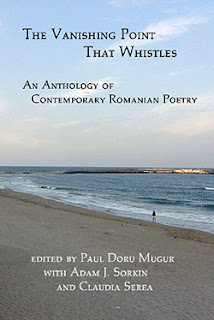 Below is a fragment of Paul Doru Mugur’s introduction to the anthology that gives you a little background about Romania’s poetry scene. I also selected a few of my favorite poems in the book. Check out the book on Amazon: http://www.amazon.com/The-Vanishing-Point-That-Whistles/dp/1584980885.

And remember, in February and beyond: read, write, and share your favorite translated poems.
—Claudia Serea

The revolution of December 1989 brought the communist regime in Romania to a violent end. Everything changed after that. Historical hardships leave long and deep scars on people’s memories. Adorno, whose work is constantly cited regarding the way that various ideologies inform society and art, famously stated that writing a poem after Auschwitz is barbaric, and after such an experience it has become impossible to write poetry. Maintaining proportions, we may also say that, after the experience of communism in Romania, writing poetry and, in general, making art in a traditional format have turned increasingly difficult. New forms of expression, capable of reflecting not only the trauma of the past, but also the brutal transition to a new socio-economic reality, were sought. In addition, people grew suspicious of art, and accused it of lack of sincerity. This may explain why the poetic discourse of post-communist literary groups has begun to mimic reality to the point of blurring the borders between reality and life. In order to continue to be meaningful, poetry became hyper-real in Romania. The new forms of poetry amplified the banality and dreariness of everyday life to the point of making the real appear overwhelmingly flat, abject, super-boring, or horrible—in other words, excessively real, hyper-real.

This obsession with the real and the search for authenticity, the rejection of any form of compromise, and the contamination of esthetic by ethic are the main characteristics of contemporary Romanian poetry. A similar neo-realistic trend is present also in the recent Romanian theater and in the new wave of Romanian cinema.

I watch a story on children in north korea
so many things are told about these children
I get informed about how many there are and how poor
in less than a minute I swallow
statistics grams of food per capita per child per month
a few-years-old kid walks barefoot
mud up to his neck
struggles to scoop some water with a plastic bag
don’t drink this, you can’t drink this
the reporter insists
you’ll get sick if you drink this filthy water
15 years ago a young woman in germany or great britain
was watching a story on children in romania
probably waiting as I am now
for the reporter to hand the child a drop of clean water
I wish I cared but I don’t
they’re so far away
they’re so fucking far away
I go round the sun in my erratic
yet aseptic safety
I tell myself I’m being manipulated and I click off the tv

WHEN I WAS A SMALL CHILD, I DREAMT OF BEING EVEN SMALLER

i dreamt of curling up in a hole among them,
sleeping sweetly in the dark,
turning to one side and the other all summer long,
then falling asleep once again.

in autumn i awaken still unrested,
unwashed like my brothers,
and when the spade thrusts near i leap out
and shout: stop digging, stop digging,
i’ll gladly come back home
if in spring you return me here.

so in spring i’m the first
they drop down into the hole.
in this way i could go on sleeping forever:
from the ground to the cellar, from the cellar to the ground,
year after year, undisturbed and forgotten.

I’m a woman,
for a long time my body’s been floating
above an expanse of water, as white as moonlight,
indecent and silent.
I’m a cruel mother
who hugs her child
to the point of suffocation,
makes him one with herself
as once it had been,
when the big bellies were shady rooms to rest in,
were the good spaces along the street,
the rooms of unending vacations
without pain, without tears,
were the place in which no one gets separated from anyone else.
I’m a woman, often ugly.
Yesterday, my body was a paper boat
that I threw playfully on the surface of this water,
hoping it would carry me away.
Today, I’m the killer whale,
often beautiful,
waiting for the fisherman.

I WAS SCHIZOPHRENIC. I LIVED (fragment)

Life is exactly like AIDS, well said:
Once you’ve caught it, you can’t escape.
You can’t possibly,
rid yourself of it.
You’re trapped in a mousetrap.
Poisoned in an anthill.

Life is like AIDS, no denying it:
A fatal disease.
Fateful, mortal.
Once you’ve caught it,
angels are already using your mouth to sing.

Claudia Serea is a Romanian-born poet whose poems and translations have appeared in 5 a.m., Meridian, Harpur Palate, Word Riot, The Red Wheelbarrow, Green Mountains Review, and many others. A two-time Pushcart and Best of the Net nominee, she is the author of Angels & Beasts (Phoenicia Publishing, Canada) and The System (Cold Hub Press, New Zealand). More at http://cserea.tumblr.com/.

The Writing Center at Passaic County Community College (PCCC) in New Jersey opened in January 2008. It began as part of five-year Title V Writing Initiative. During that time, the Center supported the students and faculty in the Writing Intensive (WI) General Education courses across disciplines. In Fall 2012, the Center opened its doors to all college-level student needing help with their academic writing. The Writing Center on the main campus is located within the Learning Resources Center (A113). The PCCC Writing Center blog was created as a way to build and support a community of practice, including writers, writing and learning support centers, students of writing, writing faculty, and more. For information on submitting a guest blog, please email writingcenter@pccc.edu for submission guidelines.

10 Most Read Posts This Month

Who is visiting this blog?

All content provided on this PCCC Writing Center blog are for informational purposes only. The owner of this blog makes no representations as to the accuracy or completeness of any information on this site or found by following any link on this site.
The owner of the PCCC Writing Center Blog will not be liable for any errors or omissions in this information nor for the availability of this information. The owner will not be liable for any losses, injuries, or damages from the display or use of this information. These terms and conditions are subject to change at anytime with or without notice